Sunday Musings “We are all star stuff.” Carl Sagan

Posted on December 4, 2011 by Maggiemoon 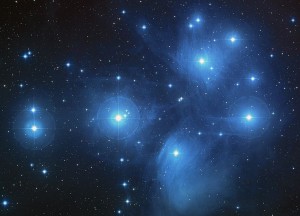 This time of the year in the Northern Hemisphere on the Eastern Horizon, we can see The Pleiades, a cluster of stars in the constellation Taurus.  The ancient Greeks named them the “Seven Sisters”.  The Greek,  word  “pleiades” means “doves”.  Of the Seven Sisters, the brightest and largest star, is Alcyone (Halcyon) seen sitting on the shoulder of Taurus the Bull in the night sky. Halcyon, meaning peaceful and calm, comes from Greek mythology, where it refers to a bird, commonly associated with the Kingfisher, that had the power to bring calm to the seas during her nesting time in order to brood her eggs on a floating nest during the Winter Solstice.   In December, the Halcyon days usher in a time of peace and calm. 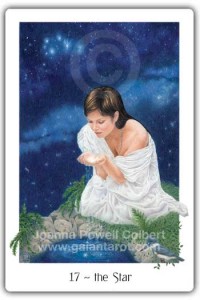 When I look at the Star card from the Gaian Tarot, http://www.gaiantarot.com/ and see the Pleiades above in the sky, it reminds me that we come from the stars and are their descendants.

“Many a night I saw the Pleiads, rising thro’ the mellow shade, Glitter like a swarm of fireflies tangled in a silver braid.”  Alfred Lord Tennyson, Locksley Hall

One Response to Sunday Musings “We are all star stuff.” Carl Sagan