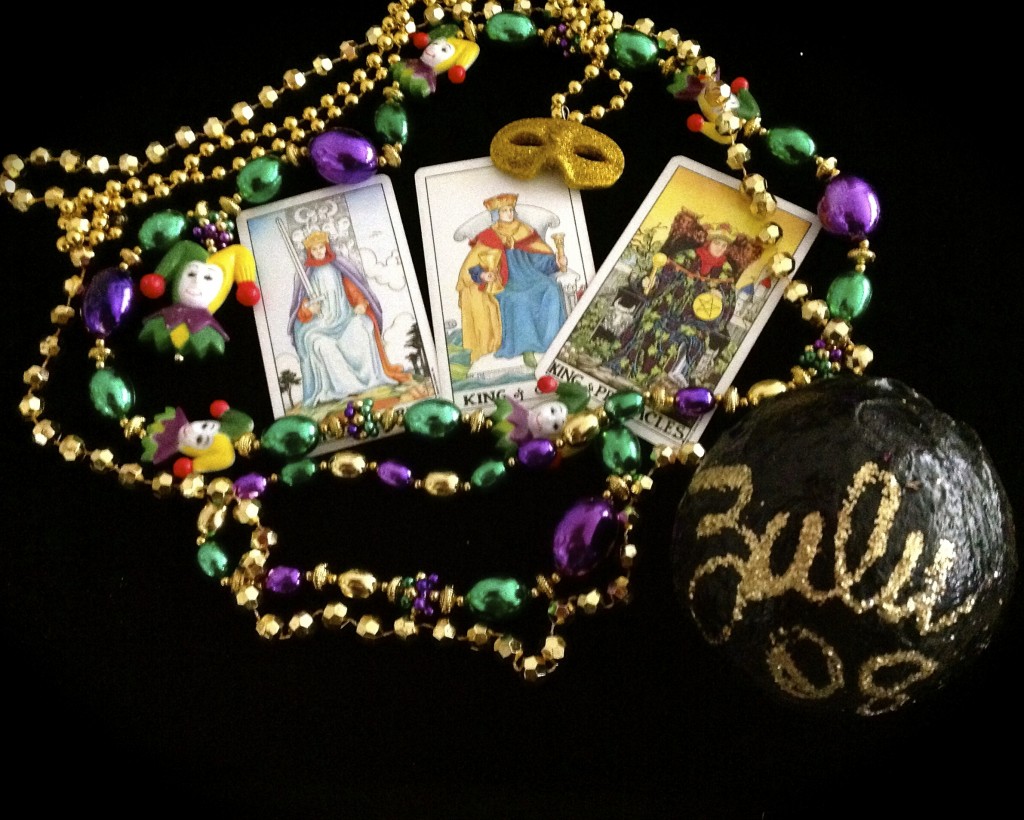 Happy Mardi Gras!   The Mardi Gras season has been well underway and culminates on February 17, 2015 also know as “Fat Tuesday” the last day of the Carnival season before Lent begins.

The Feast of the Epiphany also know as Twelfth Night or King’s Day starts the season of Mardi Gras.  In Louisiana and on the Gulf Coast of the United States, it’s the beginning of the Carnival season.  It is celebrated in many other countries as well.  The period between Epiphany and Mardi Gras is also known as the “King Cake Season”.   It’s when the Carnival Krewes begin attending their many celebratory balls, with lavish gowns, and waves of parades in the streets, throwing beads from their floats.

Purple, green, and gold, representing justice, faith, and power, which culminate at Mardi Gras.  King of Swords, Purple beads, representing Justice, King of Cups, the Green beads of  Faith, and King of Pentacles,  the Gold beads of Power.  Where can we stand up for justice in these areas, where do we put our faith, and how do we each use our own personal power.  The Zulu Coconut is hand-made by individuals who ride on the Zulu float, each is unique, and is handed out during the parade.  It is one of the most treasured prizes at the Mardi Gras parade.  In 2008, I was one of the lucky ones in the crowd to be handed a Zulu coconut! 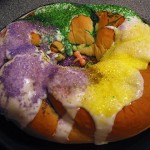 The original King Cake was believed to have arrived on the scene in the 12th century in France.  The Feast Day is dedicated to the Three Kings who traveled to see the Christ child with gifts.  It is said that the French brought the tradition of the King Cake to Louisiana.  A  King Cake is decorated with the Mardi Gras colors sprinkled on top of the cake with a doll or bean inserted inside or underneath the cake.   Not so many years ago, a friend baked a King Cake, for all of us to share.  The tradition goes, whoever gets the piece of cake with the doll has to bake or supply the King Cake for the next year; if a bean or coin is discovered, then good luck and fortune are yours for the year.    There are many wonderful King Cake recipes available or you can order one to be shipped to your home from many of the great bakeries along the Gulf Coast and now many local bakeries in your area are offering them.  If you do bake your own King Cake this year, don’t forget to put a little something extra inside!

“Mardi Gras is the love of life. It is the harmonic convergence of our food, our music, our creativity, our eccentricity, our neighborhoods, and our joy of living, all at once.”   Chris Rose